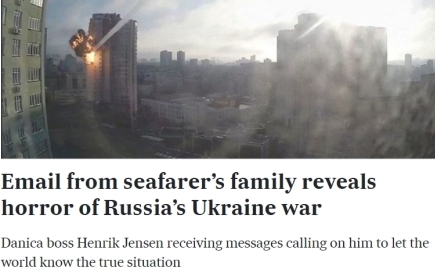 Danica Crewing Specialists boss Henrik Jensen has shared an email from a Ukrainian seafarer’s family as an example of the heart-rending messages he is now receiving.

The Hamburg-based managing director employs 1,500 Ukrainians on client shipowners’ vessels. Jensen said: “We are witnesses to a disaster.”

He sent one redacted email to TradeWinds to protect the sender’s identity. A son of one of his seafarers wrote on Sunday: “I hope that you will read this letter, this is very important for our town and whole nation.”

The writer thanked the company for its letters and support, before continuing: “Unfortunately, me, together with my mother and grandparents, are in our hometown in Ukraine. We saw and heard horrible pictures and sounds of war. We are still in a dangerous situation.”
The son explains how children there have now left home with their families “because of blasts over their heads”.

“We supported them with food and wish to be strong. We are one world and we need to stand together,” the email says.

The message was written in the basement of a house, due to missile attacks taking place every night from 24 February. “We met war here and I want whole world to know about it, war is here — in Europe,” the son writes.

His father is currently on board a Danica-crewed ship. “I want to thank you for supporting again and hope that all Ukrainian seafarers on board will be safe and can perform their duties as per our high standards,” the son said.

“I hope that everybody will return to safe home in future and will have support in this hard time, because this is also info-war and all our colleagues need to maintain a mental health either at home or on board,” he added.

The Ukrainian asked Danica to let the whole world know about the situation. “Every minute of silence can lead to catastrophic consequences,” he said. “We can stop this war only together.”

Danica said at the end of February it is trying to get stranded Ukrainian seafarers home by land after the Russian invasion closed airports.
Russian attacks were launched near the Ukrainian port of Odessa, where Danica has an office with 50 staff.

Jensen said: “It is difficult to believe that we see a war in Europe in 2022. My thoughts are with the innocent people in Ukraine, and let us hope the hostilities will cease as soon as possible.”